Moreover, you can define exchange rates for a specific currency with respect to the base currency, and you can also calculate forex gain or loss.

You can also provide opening balance for ledger accounts in any currency created in TallyPrime.

You can change the base currency and alter or delete other currencies created in TallyPrime, as per your requirement.

Like any other master, you can create a currency master in TallyPrime and use it while recording transactions and also view reports.

From the Currency Alteration screen, follow the steps given below.

There may be more than one currencies in TallyPrime for which you want to define forex rates. You can do so using Chart of Accounts.

Once you create the currency in TallyPrime, you can record transaction using the same. In the transaction, you can either retain the rate of exchange, if defined in the master, or can change, as needed.

You may be selling goods or services to a customer based in a country other than India. And the customer may need an invoice in the currency of that country. In cases wherein the base currency and the currency of the sales transaction are different, you will need to create sales invoice with the foreign currency.

You may be purchasing goods or services from a vendor based in a country other than India. And the vendor may be expecting payments to be made in that country’s currency. In cases wherein the base currency and the currency of the purchase transaction are different, you will need to create purchase voucher with the foreign currency.

The print preview of the sales invoice appears as shown below.

The Total Invoice Amount appears in both the base currency and the foreign currency.

To understanding this, let us take an example.

Consider that your base currency in TallyPrime is INR and the other currency in which the transaction is carried out is USD.

The change in rate of exchange makes the final billing amount INR 7100.

So, you made a forex gain of INR 100 on the transaction.

In TallyPrime, you can see such gains and losses as Unadjusted Forex Gain/Loss in Balance Sheet. As per accounting standard, you will need to record a transaction to account for such forex gains or losses. TallyPrime gives you easy way to record these transactions.

Create a ledger for forex gain or loss

To account for forex gain or loss, you need to create a ledger under Indirect Expenses or Indirect Income in TallyPrime.

Subsequently, you can use the ledger in the voucher class using which you can account for forex gain or loss.

Once you create a ledger, you can create a Journal Voucher Class in TallyPrime with that pre-defined ledger. Thereafter, you can record your forex gain or loss using the voucher class.

You can create multiple Journal Voucher Class for multiple currencies, if needed.

Once you create a Journal Voucher Class in TallyPrime, you can record forex gain or loss.

The adjusted amount will not be displayed in the Balance sheet as it gets transferred to Profit and Loss Account.

You can view reports in base currency and any other currency created in TallyPrime.

After opening the report, follow the steps given below.

You can view reports in multiple currencies on a single screen, making it all the easier for you to share with different branches based out of different locations.

After opening the report, follow the steps given below.

A sample Trial Balance report in the selected currencies appears as shown below. 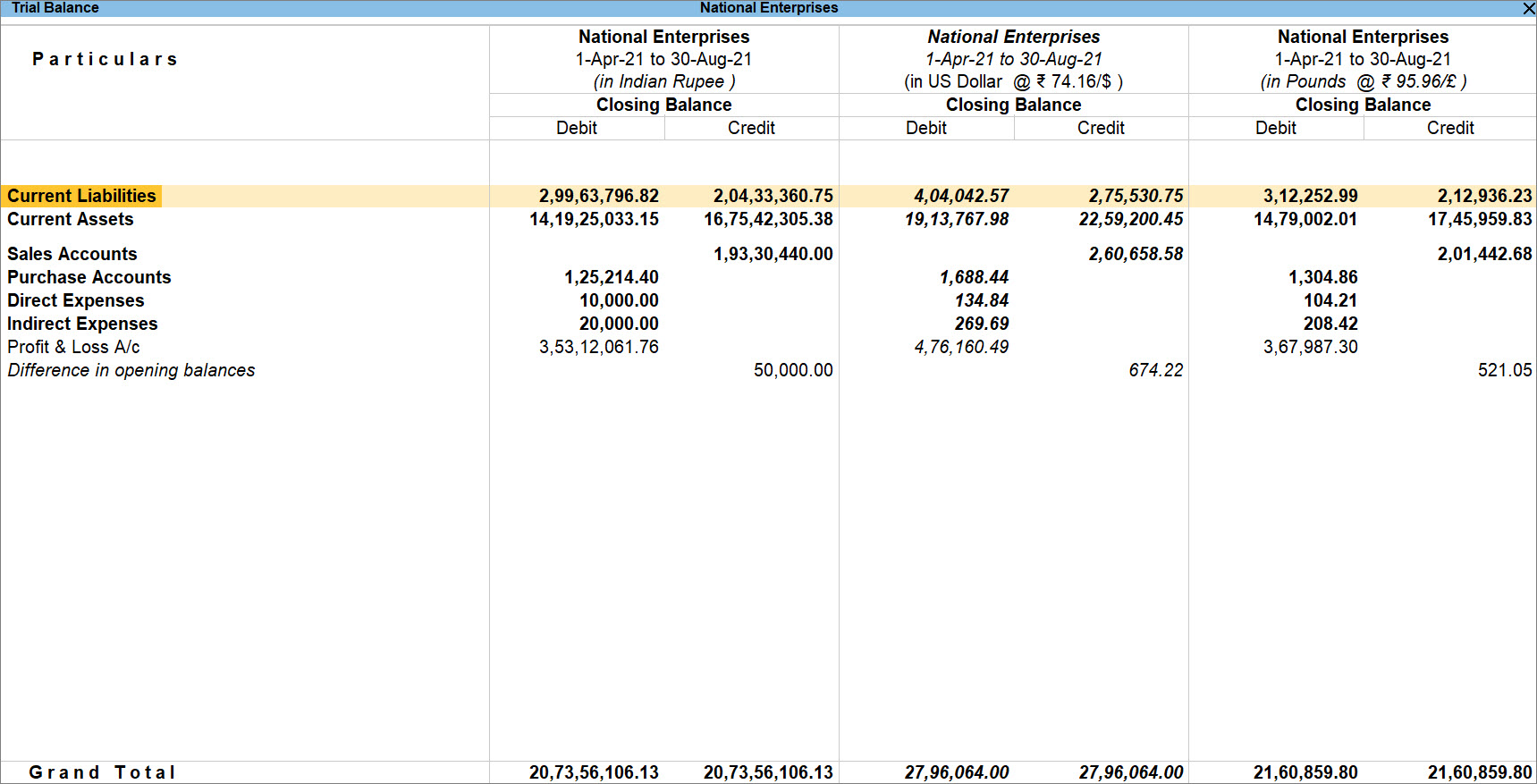 For instance, your base currency may be INR, but you may want to change it to USD or any other based on the frequency of usage it the transactions.

For example, you may have customers only in the U.S. who need invoices in USD. So, in such a case, you can change your base currency.

You can change the base currency in TallyPrime at any point in time.

In the Company Creation or Company Alteration screen, follow the steps given below.

For customers who deal in a currency other than your base currency, you may want to provide the Opening Balance in their currency.

In the ledgers created for such customers, you have a flexibility to provide Opening Balance in a currency used in the transactions with them.

In the Ledger Creation or Ledger Alteration screen, follow the steps given below.

For a currency created in TallyPrime, you may have provided a Symbol, Formal Name, or ISO Currency Code that is different than that used in the market.

You may also want to change the Number of decimal places, as per the system followed in your business.

In such cases, you can alter currency in TallyPrime.

In the Currency Alteration screen, follow the steps given below.

If you want to provide forex rate a specific date, then you can do so while altering the currency. Refer to the Define forex rate section to know more.

In a remote connection, if the Formal Name defined in a ledger while passing a transaction is not the same as defined in the company selected, an error message will appear. For example, Must use currency “$” for ledger “Sales”.

If you want to delete the currency used in one or more transactions, you can either:

If you have any other query regarding multi-currency accounting in TallyPrime, then refer to Currency in TallyPrime – FAQ.