Printing QR Code in the Customisations

QR code (Quick Response Code) is a convenient way to store all kinds of data or information in a small space. Now customers can add QR Codes in Tally invoices depending upon the IRN response. By default, this QR Code will have IRN and other information. Generally, QR codes uses to make UPI payments, company details like item details, addresses, phone numbers, E-mail addresses, company websites, URLs, and so on.

From TallyPrime Release 1.1, customers can print QR Code in the transactions like Sales, Credit Note, Debit Note, POS, and Receipt as tax invoice, and so on. This helps the customers to print the required details in the QR Code.

Sub-attribute 1 specifies the text to be enclosed in a QR Code.

Sub-attribute 2 specifies whether the QR Code should have a border or not. This is the optional parameter. The default value is ‘YES’.

In TDL, the QR Code can be used in the following ways:

QR Code : “This is the text which will be encoded into the QR Code”

QR Code : “This is the text which will be encoded into the QR Code”: NO

An additional option of error correction is implemented as a system variable (as it is expected to be an advanced setting), named ‘SVQRErrorCorrectionLevel‘. It is a number variable. With higher error correction level, the ability to sustain “damage” and function even when a part of the QR code image is obscured, defaced or removed, is higher. All QR Code that will be generated in Tally will take error correction from this system variable. The various levels it can hold are as follows:

You can set the system variable ‘SVQRErrorCorrectionLevel’ as given below:

Consider the use case as a sales executive wants the name of the stock item and its closing balance on his mobile to send it to his customer. 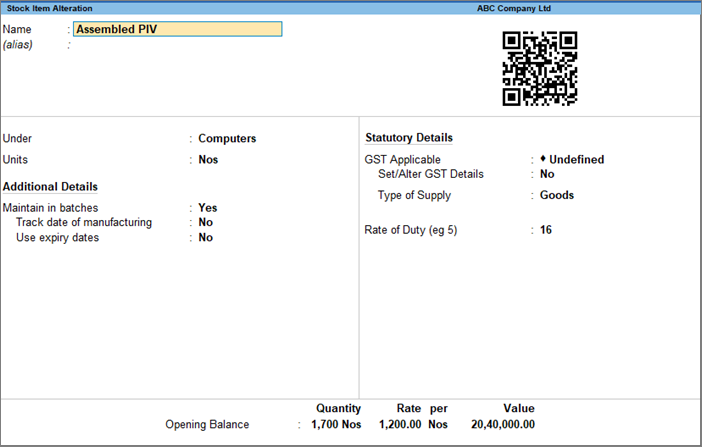 When the user scans the QR code, he gets the information on his mobile as given below: