Measure the Performance of your TDL Code Snippet Using Profiler

Profiler is a very useful tool for programmers. TDL Profiler helps you to analyze and optimize your TDL code. The performance of the code snippet can be obtained using TDL profiler. The profiler provides information such as the time taken to evaluate a TDL artefact, the number of times the TDL artefact was executed and so on. The TDL artefact may be an expression, function, collection, remote call, a view change, or a Report/Form regeneration.

<Perform the operation which needs to be profiled>

Note: The commands are case insensitive.

This section details the order of execution of the TDL artefacts. In this section, a TDL artefact appears as many times as it was executed.

The data in this section is grouped based on the Parent Hierarchy. For example, if a TDL artefact appears more than once under a parent hierarchy, then the data of the TDL artefact is grouped.

The data in this section is grouped by the TDL artefacts. Here each TDL artefact appears only once.

The steps to get the profiler information are:

The dumped profiler information when opened in Textpad, is as shown below: 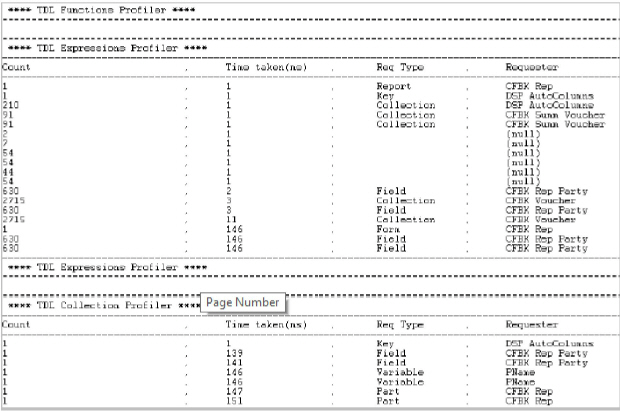 As seen in the figure, the profile information shows the time taken for evaluating every expression as well as how many times (Count) the same expression or collection was evaluated/ gathered.

Developers are already aware that apart from performing various arithmetic operations, Calculator Panel can also be used to issue select Queries like Select $Name, $Parent from Ledger, Select * from Company, etc. Now, the Calculator Pane can also be used by developers for Profiling, Debugging, Key Recording and Playing back by setting various modes.

The following Calculator Pane Commands are supported for the profiling information:

It sets the mode to Profiler, which means that Profiling Commands will be accepted. It provides certain calculator pane commands to the developer in order to check the performance of code.

Once the mode is set to Profile, commands issued in the Calculator Pane work in Profiling Context.

This command starts gathering the count and time taken for evaluating a TDL Artefact in memory.

This command is used to end the profiling.

This command is used to dump the collected profile data to the file tdlprof.log . This also clears the memory once the data is dumped.

This command is used to dump the collected profile data, including artefacts which have consumed negligible time, i.e., zero processing time, into the file tdlprof.log. It also clears the memory after update to the file.

This command is used to clear the existing profile data from the Memory.

This command gives the list of Profiler commands, with a description of their purpose.

Apart from Calculator Pane Commands, there are several other TDL Actions provided, to programmatically execute the profiling operations. They are:

This action is used to start profiling. The count, time taken and other useful information of every function, collection, etc. gathered along with expressions within the report, are profiled in memory.

This action is used to dump all the profiled information to the file. It also clears the memory after dumping the information.

<File Name> is the name of the file to which the information has to be written. In the absence of the ‘File Name’ Parameter, the default file updated will be tdlprof.log

<Logical Value> if set to YES, the ‘Dump Profile’ action also includes zero time-taking artefacts. If it is enabled, the action is similar to calculator pane command DumpZ, else it is similar to Dump.

This action is used to stop profiling. If the Optional parameter ‘File Name’ is passed, then information is also dumped into the file, without requiring the action Dump Profile.

<File Name> is the name of the file to which the information has to be written.

The following function has been introduced to support profiling:

This function is used to check the current status of the TDL Profiler. It returns logical value TRUE, if the status of the profiler is ON.